At Home At Sea 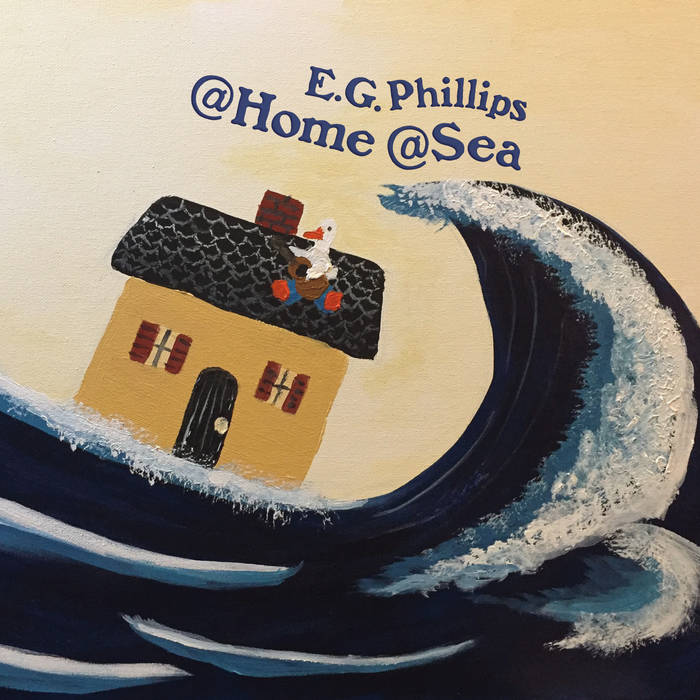 When E.G. Phillips talks about his musical influences, it sounds like some cosmic cocktail party: Bob Dylan, Miles Davis, Blossom Dearie, Tom Lehrer. And don’t forget the time-travelling gate-crasher: Talking about his lyrics, Phillips says, “One of the parlor games that I’m sure people could play is ‘Spot the obscure Doctor Who reference.’”

What it all adds up to is some of the most compellingly originally, slyly humorous, and sneakily affecting singer-songwriter music you’re bound to hear in this homogenous age. And Phillips brings all of that to the table on his bold new album, At Home At Sea. The new disc builds on his 2017 debut Fish From The Sky with material written since he started playing out on the ever-inventive San Francisco scene.

This is not to say it was a straightforward journey — a few songs on the new record are resurrected from the distant past with new lyrics while others had been temporarily mothballed but then given new life. Of two of the songs Phillips says “I had a different vision of them belonging to a sequence of songs about a particular relationship that didn’t work out. I ended up pulling them into this album.” Of the amalgamation that resulted “It wasn’t until after the recording was completed and I was reflecting on it that I started to realize the common threads that were in there — notions about attachment and its complexity. A lot of the songs are about relationships that have gone awry or perhaps should have been avoided in the first place."

Although the album’s title (which felt like a gimme once the opening track had been written) might suggest a collection sea shanties, Phillips was sure from the beginning that he wanted to emphasize his love of jazz music this time around when he went into the studio with producer Ben Osheroff, who contributes his jazz piano chops to many of the tracks. ”In general, this album focuses more on that influence on my songwriting. For a time, I lived near Positively 4th Street records in Minneapolis. I decided to start poking around their jazz section out of curiosity, and I came across Miles Davis’ Kind Of Blue. Then I started to going to jazz concerts. It wasn’t an immediate, ‘Yeah I get this.’ But I wanted to. So I started exploring Miles, Coltrane, Mingus, and Ellington — and that’s music I came to really bond with.”

Phillips assembled an impressive team of local musicians with whom he'd previously shared bills and developed personal relationships (some of whom “accepted payment in the form of bottles of wine,” he jokes) for the album. And he gave them a lot of creative leeway in the collaboration that brought his alchemic creations to life. “With writing, there needs to be an aspect of play to it,” Phillips says of his approach. “You’re sort of a mad scientist. You know, ‘What happens if I do this? How does this work?’ You’re a kid in a sandbox. You’re creating things just to see what they do. Pure, unadulterated experimentation. Wanting to create Dylanesque or Beatlesque sort of songs and carry in the jazz tonalities and constructs was appealing to me.”

You can hear the way that Phillips mixes up the medicine in the various songs on At Home On The Sea. “The Albatross Song” and “A Finnish Midsummer Midnight” surge forward with nimble lyricism and an almost deranged momentum, as if Colin Meloy were fronting They Might Be Giants. Phillips also seems right at home crooning the piano-driven torch song “An Alternate Route (To Your Heart)” and navigating the complex Latin-tinged rhythms of “All I Can Share Is Photos.”

Other stylistic detours include the countryish longing of “Lighthouse At The Edge Of The World” and the Zeppelin-style drama of “The Comet And The Wandering Moon.” But Phillips saves his greatest tricks for last on the album, keeping the arrangements spare and letting the beauty of his songwriting shine through on “You Will Sail With Me” and “Your Inexorable Pull.”

Another quality that characterizes Phillips’ songwriting is his agile vocabulary; you won’t likely hear too many tunesmiths that can work in words like “funicular” and “concentric” so deftly. “Words are wonderful toys,” he says. “There’s a lot of meaning imbued in particular words. There’s what you can do with sound as you string things together. There are concepts that you can relate to each other that may not seem immediately related, but you can create a picture using images. There's an old saw that you hear with creative writing — ‘show, don’t tell,’ — which is something that I’ve brought to bear with my songwriting.”